By Mark RitsonJanuary 31, 2018No Comments

The prize for the most intimidating sporting arena in Europe is an easy one to award. Ask any former professional football player or visiting fan about the place that they dreaded more than any other and most will venture Ali Sami Yen. The stadium, the home ground of Turkish club Galatasaray, stood on the European side of Istanbul for nearly 50 years until it was demolished in 2010.

Despite hosting fewer than 30,000 fans, its diminutive size did not stop the stadium becoming infamous during the latter part of the 20th century. The fervour of its local supporters, their predilection for blazing pyrotechnics and the sea of red and yellow that bathed the stadium whenever Galatasaray played led to its infernal nickname. Most football fans simply referred to the stadium as ‘Hell’.

The name stuck. The first thing visiting European teams would often see as they entered the arena to play Galatasaray was a giant banner in English or French saying “Welcome to Hell”, followed by fireworks and the insane noise of the local fans packed into the small stands.

It was an entirely deliberate attempt at sporting intimidation and regularly worked its dark magic on visiting teams. Barcelona, Manchester United and Real Madrid all came, saw and were conquered by Hell and its army of manic Turkish supporters.

So when Leeds United drew Galatasaray in the semi-final of the UEFA Cup in 2000 there was widespread dismay in Yorkshire. In the biggest game for either team in many years, Leeds would have to enter the dreaded inferno of the Ali Sami Yen stadium on a night when it would be at its hellish worst.

I remember watching the Leeds team enter the stadium on TV that night in a pub and scanning the stands to take in this wondrously intimidating sight – a day after two travelling Leeds fans had been stabbed to death in Istanbul. As the camera panned across to the tiny contingent of Leeds supporters, surrounded at all corners by hordes of red-and-yellow fanatics, two of the Leeds contingent unfurled a giant white banner.

I turned to one of my oldest friends, a committed Leeds fan. He just smiled back and sipped his pint proudly as if this was part of normal, everyday life for a Leeds fan. “We are Leeds”, he eventually offered – more as an explanation than an exclamation. And after a pause. “We are Leeds”.

Leeds United is an outrageously unusual – one could almost say incomparable – sporting brand. Rarely anywhere in the world of sport do genius and idiocy, eminence and inferiority, so consistently wind together so tightly and so continually around a single team. True greats like John Charles, Billy Bremner, Jimmy Armfield and Jack Charlton mix with a secondary cast of reliably unreliable journeymen and international mercenaries in a very unusual way.

This is a team that have been champions of England three times despite having now spent 13 years outside the Premier League. A team that hired Brian Clough just as he was coming into his brilliant, championship-winning form and then fired him barely two months later. A team that saw the genius of Eric Cantona when everyone else was blind to it, then sold him for the bargain basement price of a million quid to – of all people – Manchester United.

Leeds United is an incomparable sporting brand. Rarely do genius and idiocy, eminence and inferiority, so consistently wind together.

To know Leeds United is to know one of the strangest, most attractive and most repellent teams of all time. But you must agree that this is, by any definition, one hell of a brand.

I tire of the usual league tables that measure the ‘strongest sporting brands’ and end up with a three-way contest between Barcelona, Manchester United and Real Madrid. Of course, these are very strong brands but they are also fantastically rich and very successful teams too. Brands are not just meant to prosper during the good times; if anything they fulfill an even more important function during the lean times, when brand loyalty is about the only thing an organisation has going for it.

You’d struggle to find many seasons in the last two decades where Real, Barça and United did not win at least one trophy each. It has been a quarter of a century since Leeds won anything, and yet the fans keep coming.

This year Leeds averages 30,000 fans for its home games – the same number of fans that crammed into Ali Sami Yen all those years ago for one of the biggest nights of the year in European football. That’s a massive 10,000 more fans than the average attendance for the rest of the Championship sides, and significantly more than many of the clubs that sit above them in the ritzy Premier League.

Make Real Madrid winless for 25 years and see how many people would turn up to support them on a miserable Wednesday night playing Burton Albion in the rain. And losing. Three-nil.

The worst rebrand in history

So when I saw the tweet from Leeds United last week announcing that they had a new crest as the team approached the club’s centenary I admit my heart fluttered. This was the intersection of two equally dangerous vectors.

First, this is rebranding, which I regard as the most asymmetrical corporate strategy of them all. There is literally no upside of a nice new logo; there is only pain if you get it wrong. And inevitably it goes wrong a lot of the time.

Second, this wasn’t any old company committing to a dangerous rebrand. This was Leeds United. Leeds ‘let’s sell Eric Cantona, fire Brian Clough, get relegated’ United. On the one hand the club has such a rich heritage that a new logo could mine some wonderful artefact from its past and all would go well. But when most of that heritage is also dogged by moments of incomparable stupidity it was highly likely that this would not end well at all. 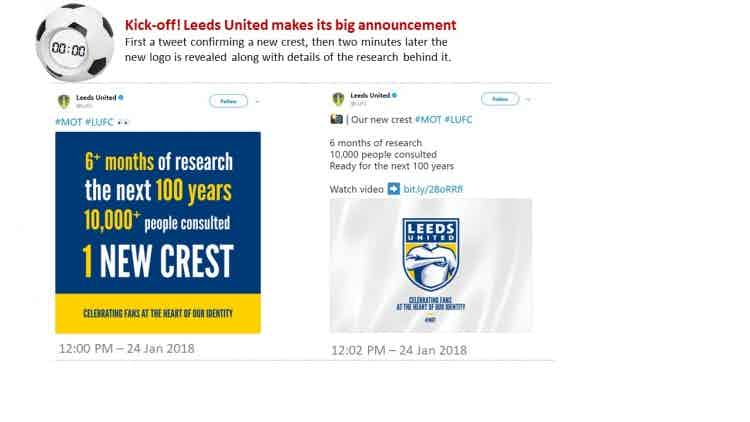 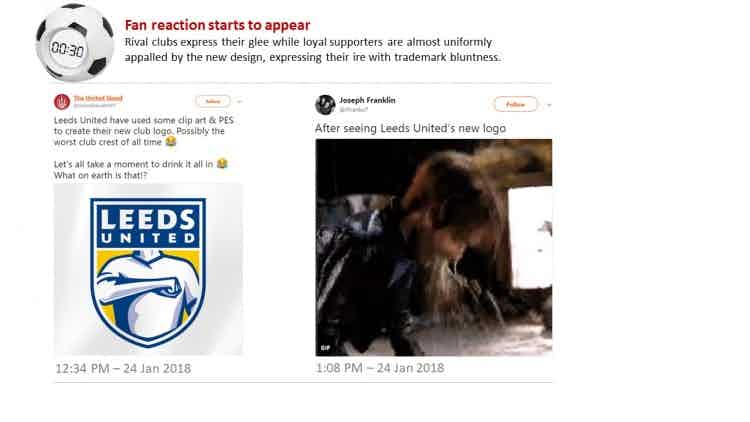 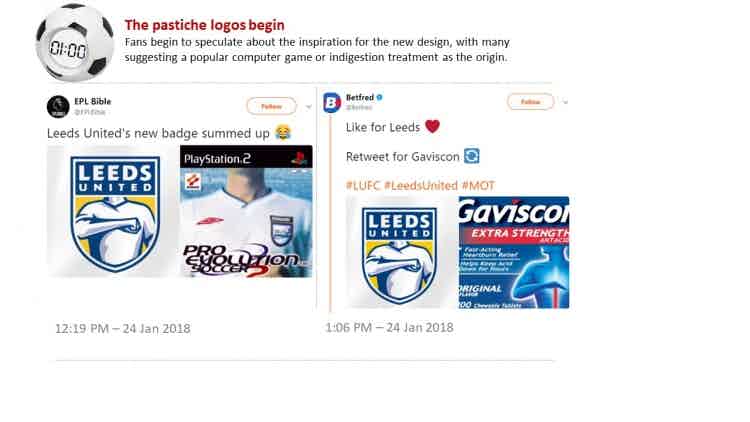 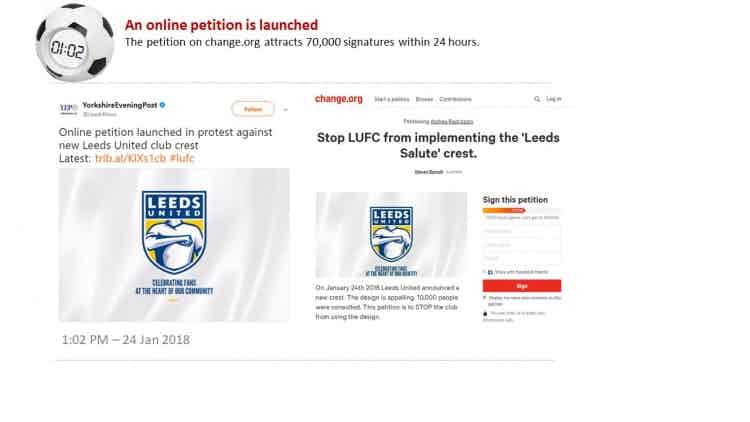 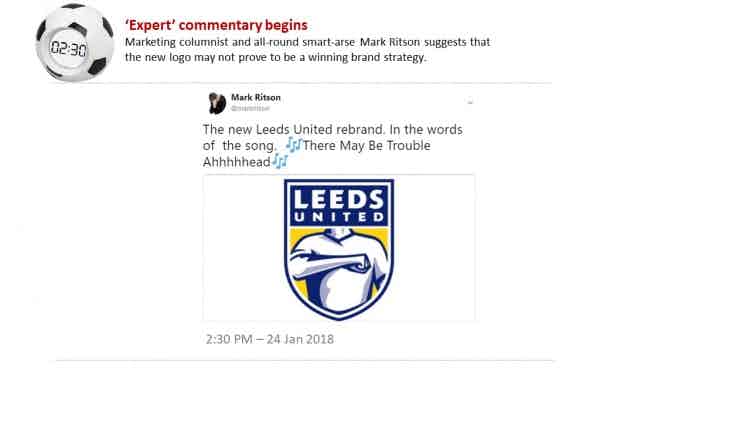 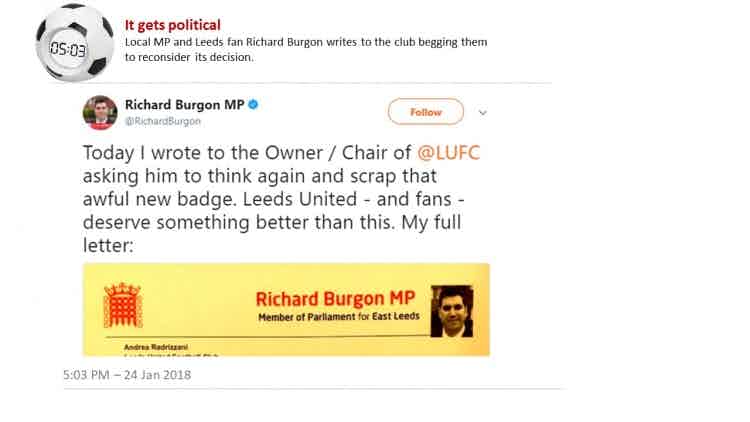 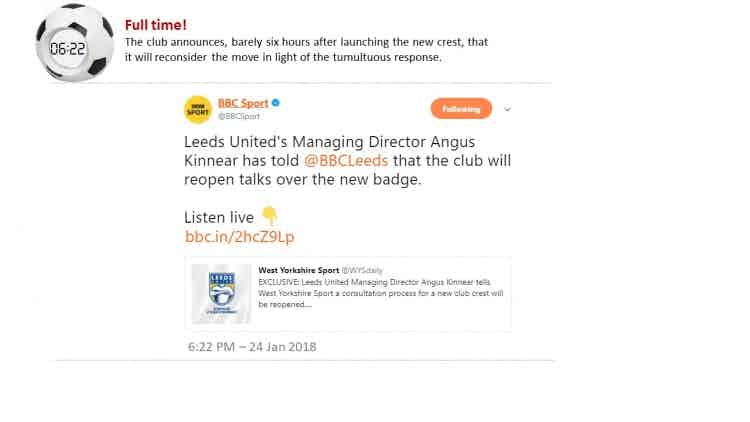 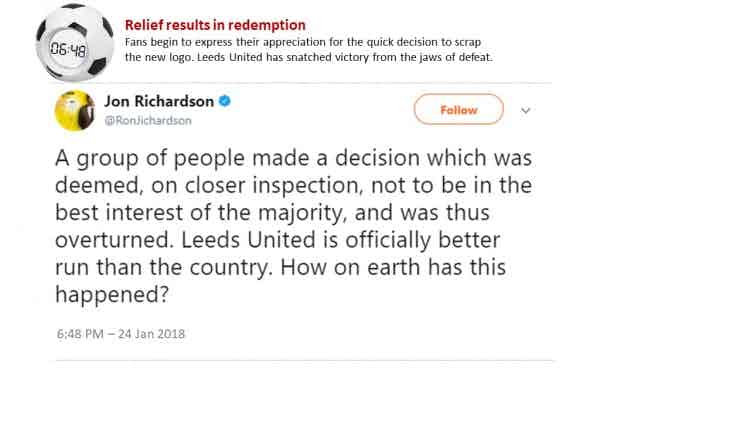 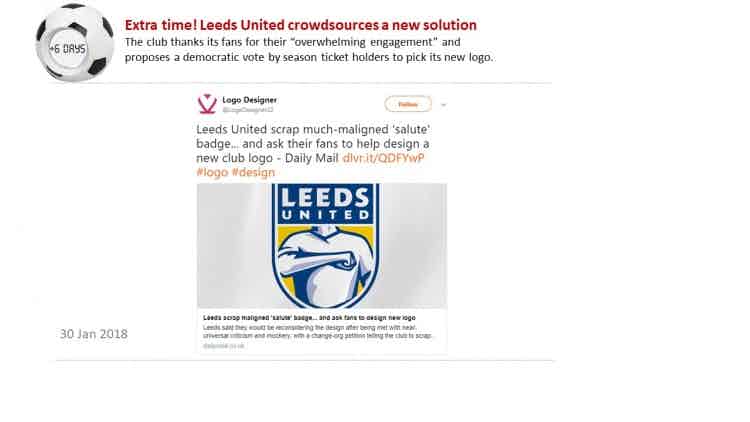 As the helpful graphic above explains, it played out incredibly badly. I would go so far as to say that in the long and dark history of rebranding this is, by quite some distance, the worst single exemplar of introducing a new logo that the world has ever seen. Hyperbole? I think not.

You take a secret gesture of the club and make it an explicit part of the logo. You use, from what I can gather, an in-house creative team who look like they were using a laptop running Windows 95. You launch it on Twitter and, despite claims of extensive research and engagement, you almost immediately alienate and humiliate your entire supporter base in about three seconds.

A word on this. Of all the target markets I would least like to upset with a new brand strategy, in ascending order of intimidation and fear, I would suggest: 3. Viking Hordes, 2. the Wu-Tang Clan and 1. Leeds United fans. They are a long-suffering bunch but they still bear their grudges deep and wide and long. I’d rather pitch to Hitler the idea of dropping his swastika for something ‘a bit softer and maybe in Helvetica font’ than mess up the Leeds United logo in front of Leeds fans.

What happened next, however, propels the new Leeds logo into a special place in the big bad book of rebranding. The sheer speed of response is something that the Leeds United forward line can only sit back and admire with envy. Within the hour a petition had begun, thousands of complaints were registered and, barely six hours after the brave new logo was launched, it had been pulled by senior management with an abject apology and a corporate pledge to reconsider things.

And it is here that we actually see the positive side of Leeds United. It’s never just a tale of sour without the sweet when it comes to Leeds. Despite the insensitivity and outright amateurishness of the executives in creating and launching their new logo, the same managers played a blinder in quickly pulling it, apologising profusely and – this week – announcing a new process in which fan designs will be considered and the final choice made democratically by the season ticket holders of the club.

There it is again. That weird combination of uselessness and brilliance that is Leeds. They will end up with an amazing new club badge I will bet. And the fanbase will unite around it because it was their own decision (and also not shit like the previous option). They still won’t win anything for another quarter-century. But they will lose with a decent logo they can be proud of and – given this is Marketing Week and not Football Focus – isn’t that the real point of it all?

It has been an extraordinary week. Many marketers will have seen nothing like it and may not see the like of it again. A logo created, launched, killed and replaced in six hours. But if you are a Leeds fan this is par for the course. This is just another bump along the long and winding path to Elland Road. They are used to it by now. They have seen it all before. They almost expect it. They are, after all, Leeds.

Professor Mark Ritson will be teaching the next Marketing Week Mini MBA course from 24 April 2018. To book your place, sign up at marketingweek.com/mini-mba.

Phvntom, Inc. is a digital marketing company located in Boise, Idaho that creates websites, apps, and full-scale promotions/campaigns for other businesses. The views and opinions expressed in this article are strictly those of its authors and were not written by Phvntom. This article was originally published by Marketing Week.

Unilever CEO tells activists to ‘call us out’ amid plastic criticism

Coca-Cola, Cadbury, Brexit: 5 things that mattered this week and why